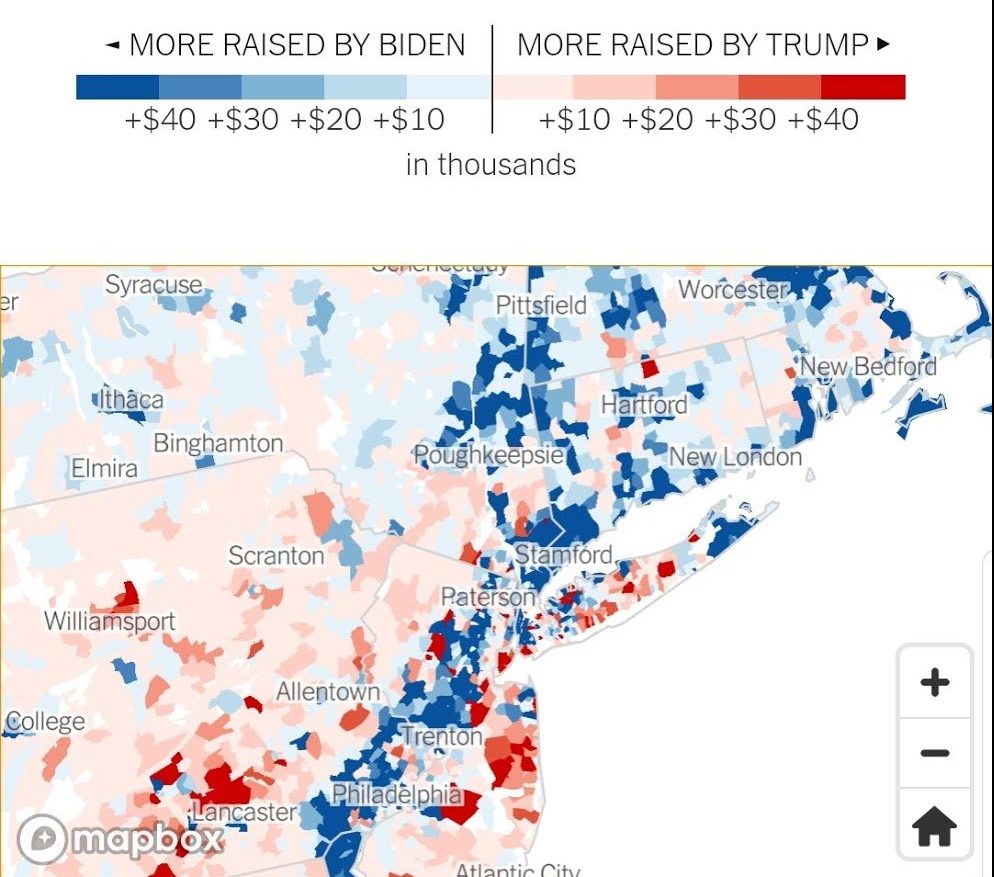 A common problem with commercial printing can lead to some odd results. I used to move in those circles back in the day, when I was a print production manager for advertising agencies. When I went “on-press,” meaning I went to the printing plant to watch the sheets come off the press to make sure that the color was right, the first thing was always to make sure that the registration is correct.

Often the sheets will have registration markings like the one at the left on the margins. The press can be adjusted to bring these all into line with each other. If they’re not, you’ll see colored halos or moire patterns in the printed images. Ordinarily it’s just sloppy looking; but in this case it’s more than that — it actually presents a misleading picture.

The New York Times’ data visualization team is top-notch, and they consistently are held up as an exemplar of How To Do It. Which is why the printing problem I’m going to show here is irritating. I’m not going to comment on the politics of it, even though it’s political content; I’m more concerned about the facts being presented. But enough preamble.

The map shows, county-by-county, the preponderance of donations to candidates Trump and Biden. The traditional red is applied to the Republican candidate, and blue to the Democrat. The density of the color indicates how far the skew from 50-50 is: darker red, more Republican; darker blue, more Democratic.

This is the on-line version for the northeast US.

Let me call your attention to a few spots. The southern coast of Connecticut, which shows a strong blue pattern all the way across, through Rhode Island, up and around Cape Cod including Martha’s Vineyard, Nantucket, and the Boston metro area. This is pretty much what you’d expect. Now look at the printed version that arrived at my home yesterday:

Suddenly there’s a string of strongly Republican voters on the southern coast of Connecticut and the Islands, and the south shore of Long Island. Because of a printing error, you’re seeing donors that don’t exist!

And a photo taken of the print edition:

Again, there’s this string of strong Red donors all along the coast. Ultra-wealthy owners of beachfront property? Why is one of the Channel Islands so polarized, with the northern part Democratic and the southern Republican? (It’s a national park — why is anyone living there at all?)

The legend holds the answer.

The blue/deep violet color is made up of cyan and magenta inks. The line under “MORE BIDEN DONORS” should be four solid color blocks, not 12. As the density of donations to Biden increase the blue is heavier, but so is the magenta artifact right below.

Meanwhile, the Trump donors line is made up of magenta and yellow inks. Because the magenta carries the visual weight, with the yellow not carrying any information, those counties show up pretty much as expected, red-to-pink.

Maybe next time, rather than relying on magenta to make a darker blue, use black instead?