NEON is here, and they weren’t kidding when they said it’s an artificial human. We have leaked full promo videos that were found in the source code of the official NEON website by reddit user Saniska.

Look at these people, they look like ordinary humans right? Well what if I told you, that they are computer generated images, graphics, models that are animated by an algorithm, welcome to the future.

You may have seen this clip. Watch Bill Hader morph into Tom Cruise at around the 0:58 mark, go back-and-forth, and then around the 2:00 mark he morphs into Seth Rogen. It’s pretty seamless, at least at the non-HD presentation mode.

Which is real? Which is the fake? Republican congressman Paul Gosar doesn’t give a damn.

1. To the dim witted reporters like @dmedin11: no one said this wasn’t photoshopped. No one said the president of Iran was dead. No one said Obama met with Rouhani in person.
The tweet says: “the world is a better place without either of them in power”. https://t.co/zwLPPXniQh

I’m going to posit that if you present a photograph to make a point, you are in fact saying that this is a thing that happened. And that, in fact, is lying. And to imply that we’re too dimwitted to get your point is downright evil.

So here we are in a social media world awash with bullshit. Maybe bullshit is too nice a word. After all, the definitive tome on the subject (you can cheat, and read the whole thing here) tells us that the bullshitter doesn’t care about truth.

It is impossible for someone to lie unless he thinks he knows the truth. Producing bullshit requires no such conviction. A person who lies is thereby responding to the truth, and he is to that extent respectful of it. When an honest man speaks, he says only what he believes to be true; and for the liar, it is correspondingly indispensable that he considers his statements to be false. For the bullshitter, however, all these bets are off: he is neither on the side of the true nor on the side of the false. His eye is not on the facts at all, as the eyes of the honest man and of the liar are, except insofar as they may be pertinent to his interest in getting away with what he says. He does not care whether the things he says describe reality correctly. He just picks them out, or makes them up, to suit his purpose.

And hiding his purpose is part of it.

What he does necessarily attempt to deceive us about is his enterprise. His only indispensably distinctive characteristic is that in a certain way he misrepresents what he is up to.

Well we clearly know what he’s up to as well. Based on that, to make a long story short, Gosar is lying. “Telling a lie is an act with a sharp focus. It is designed to insert a particular falsehood at a specific point in a set or system of beliefs, in order to avoid the consequences of having that point occupied by the truth.”

But I digress. It’s lies in social media

This is so important. Even if we only see things like this clip in passing, they make an impression. Somehow we need to aggressively self-filter which messages we absorb. To the point where we discount everything we see online unless and until we can independently verify it. https://t.co/D8RC4dXRdd

And of course these lies are propagated on social media.

This week’s — part of a long-running series of OMFG incidents — Facebook debacle was the Teen Vogue controversy. Was it an ad? Was it paid content? Was it actual editorial? 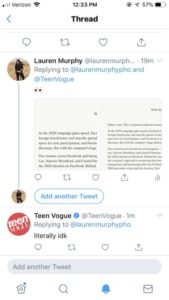 Teen Vogue’s politics vertical has had a pretty good reputation for giving its young readers an honest look at the news. But the headline that ran, “How Facebook Is Helping Ensure the Integrity of the 2020 Election,” is obvious bullshit, the kind of thing that can take your reputation right back to zero.

This is not a solution

Facebook continues to refuse to change its policies. Microtargeting is still cool with them. File this under completely-missing-the-point, according to the NY Times, “Facebook also will add a feature that allows users to see fewer campaign and political issue ads in their news feeds, something the company has said many users have requested.”

It’s not that the ads are annoying. If I’m personally perturbed by a floor of politics that’s one problem. The bigger problem is that people are ingesting lies. If you like what you’re seeing, why would you decide to see less of it? The lies make certain voters feel good, and they serve to reinforce their lack of accurate information.

The psychological term is “confirmation bias,” and certainly Facebook’s marketing people are familiar with the concept.

And we’re all guilty of it. But as far as I’m concerned there are enough true reasons to dislike certain politicians. I don’t need to be overloaded with false reasons. But that doesn’t mean that low-information voters are going to see it that way, and willingly disconnect from the memes that confirm their false beliefs.

After all if something feels good, if I get that endorphin rush from seeing what I believe to be true confirmed right there on my Facebook feed, why should I stop? I want to believe that this woman is real: 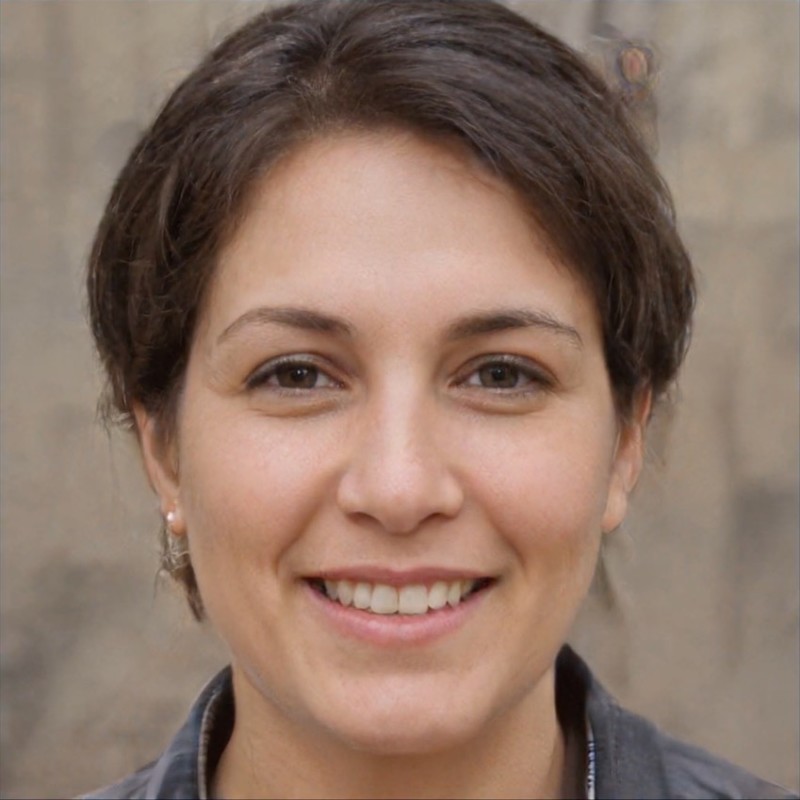 She pushes all my buttons. But she’s as fake as the AI-generated people in the video at the top.

So what’s a consumer to do?

But even reputable sources screw up. The New York Times has been engaged in serial journalistic malpractice in its headline writing the last few years. It’s initial front-page full-width banner that Trump was exonerated by the Muller report is the most egregious. They bought the administration’s spin on it wholesale — even though the administration’s release couldn’t even quote one complete sentence from the actual report.

And this one, which lead to widespread calls to just cancel your Times subscription once and for all:

Not sure "TRUMP URGES UNITY VS. RACISM" is how I would have framed the story. pic.twitter.com/quOibXsp32

The Post’s Aaron Blake does a good analysis of how a generally good story got such a misleading — and in this case, bullshitty — headline.

So the spin is everywhere. God be with us all.

Another thing I’m doing is keeping my different social accounts in topic columns. Facebook is mostly going to be friends/family/what-I’m-doing; Twitter is social and political commentary; Instagram just interesting photos. I’d be so happy if all my friends stopped putting political stuff on Facebook.

As you go through life on the net, don’t take anything at face value. Especially if you think it’s good news. Even the stuff in this piece. Look for one or two independent confirming sources. Consider the reputation of those sources. And — especially — take a quick look at sources that might debunk them.