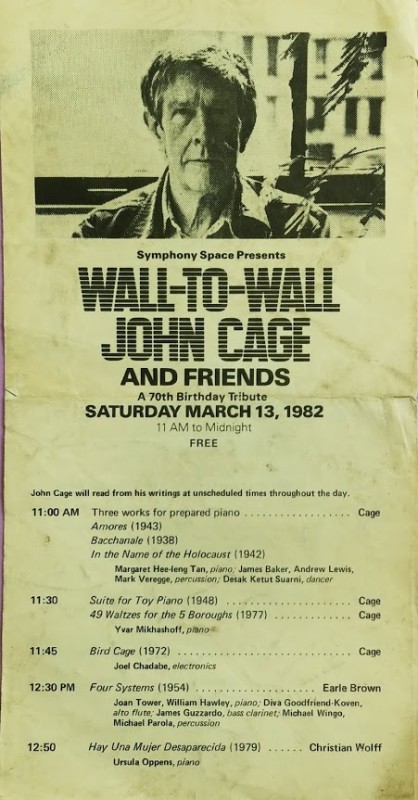 A Program From The Archives

I found this in a bin I was unpacking the other day. A friend and I sat and listened most of the day, and I listened to the rest on the radio at home.

When we left, around dinner time, there was a long line of people waiting for seats to open up.

It was quite the cavalcade of stars on stage. Ursula Oppens, Joan Tower, Christian Wolff, Paul Jacobs, David Tudor, Paul Zukovsky, Nam June Paik, Charlotte Moorman, Charles Wuorninen are a few names that jump out, not to mention continuous appearances by Merce Cunningham and Cage himself.

One piece I heard on the radio later that day was “Inlets.” I found it stunningly beautiful and I’ve always been on the lookout for a recording. Maybe I’ll just buy one on-line.

I saw Cage in person on two other occasions. Once in Cleveland when the Orchestra was premiering his “Renga With Apartment House 1776.” He delivered the pre-concert lecture. I recall he talked about seeing a tasty variety of mushroom on Chester Avenue.

And another time we went to see Schonberg’s “Moses Und Aron” at City Opera. At intermission, there was a knot of people a few rows ahead of us. Looking closer, they were all surrounding and taking in the atmosphere of John Cage — he a former student of Schonberg and a living link to the beginnings of 20th century modernism.

This was Symphony Space’s fifth “Wall To Wall” performance. I understand it’s still going strong, 40 years after it started.