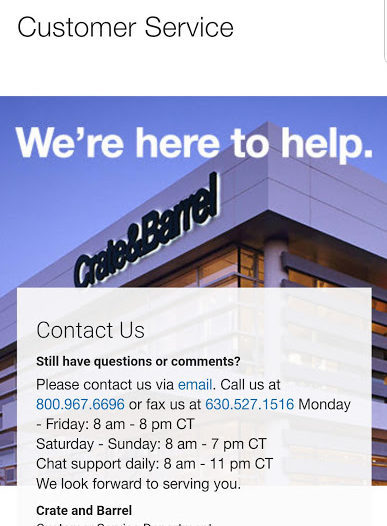 Two days ago I placed an online order for a piece of furniture from Crate & Barrel. For <reasons> I decided not to order it after all. Should be no big deal, the piece was back-ordered and wasn’t going to ship for two weeks anyway.

The buzz is that AI and chatbots are going to replace traditional customer service over the phone and over the internet. One wonders what an artificially intelligent engine would make of this interaction. The morning after ordering, I tried simply replying to the confirmation email. Of course it bounced, because it was a no-reply address.

Then I tried their customer-support form (the one you get to from the “email” link on the image). Supplied full details. No reply. I did it again a little later, adding “DELIVERY WILL NOT BE ACCEPTED.” Still no reply.

Then I tried the customer-support phone number. The first couple of phone-tree buttons worked fine. 2 to inquire about an order, and enter the order number. I got a voice saying, [cc]”to select [name of product] press 1.”[/cc] The name of the product (Belmont Kitchen Island) was rendered phonetically and was completely unintelligible. Then, [cc]”to select [ ] press 2.”[/cc] There was no second product. When I pressed 1, it told me [cc]”the status is [ ].”[/cc] Silence.

Then we get into the hold-music-from-hell phase. In a major key voiced to sound like minor, cadencing with a suspended 9, it reflected and encompassed all the despair of phone robot interactions in the 21st century.

I was told, several times, that “call volume was higher than normal.”

The big question for me is, why is the call volume always higher than normal? Isn’t that the new normal then? And if 40-minute rates are normal, why can’t you hire more agents?

Do I even have to tell you they never called back?

For fun, I tried calling again. I can’t tell you how many times I heard the same music loop. Music filling me with existential dread for the future of shopping, where every interaction is accompanied by a backdrop of elevator music. On an elevator ride that never ends.

While I waited, I logged into my American Express account and put in a request to block the transaction. Since C&B wasn’t giving me any satisfaction.

At last, I got Wendy from customer service on the line. I told her I wanted to cancel the order. She asked for the order number, I gave it, and that was that. Maybe 20 seconds on the line. Shortly after, I got a confirmation email. I’m going to hold off briefly on retracting my Amex request.

A couple of takeaways. First, there’s no excuse for a letter-by-letter phonetic translation of words like “kitchen” or “island” into things that can’t be understood. There are libraries available for this. I might also mention that the ADA would really require these things to be usable for people with various kinds of visual impairment. If your only option is voice, this is not acceptable.

Second, why is a null choice — the second (non-existent) product — being offered? I wonder if some programmer got the array index wrong, starting at 0 instead of 1.* And if there is no order status (to speak of) don’t say “the order status is [ ].” It’s not that hard to write in the logic to say instead, “the order status is not available.”

And third, don’t select hold music that makes me long for the days of Muzak.

[Updated] My money was refunded.

* For non-programmers, in many programming langues, if you have an array like [cc]products = [ “product one”, “product two”, “product three” ][/cc] the entries are indexed starting with 0. So

If there’s a mismatch between how items are added to the array, as is perhaps happening here, the system might think it’s looking for just one product, [cc]products[1][/cc] that doesn’t exist, instead of [cc]products[0][/cc].