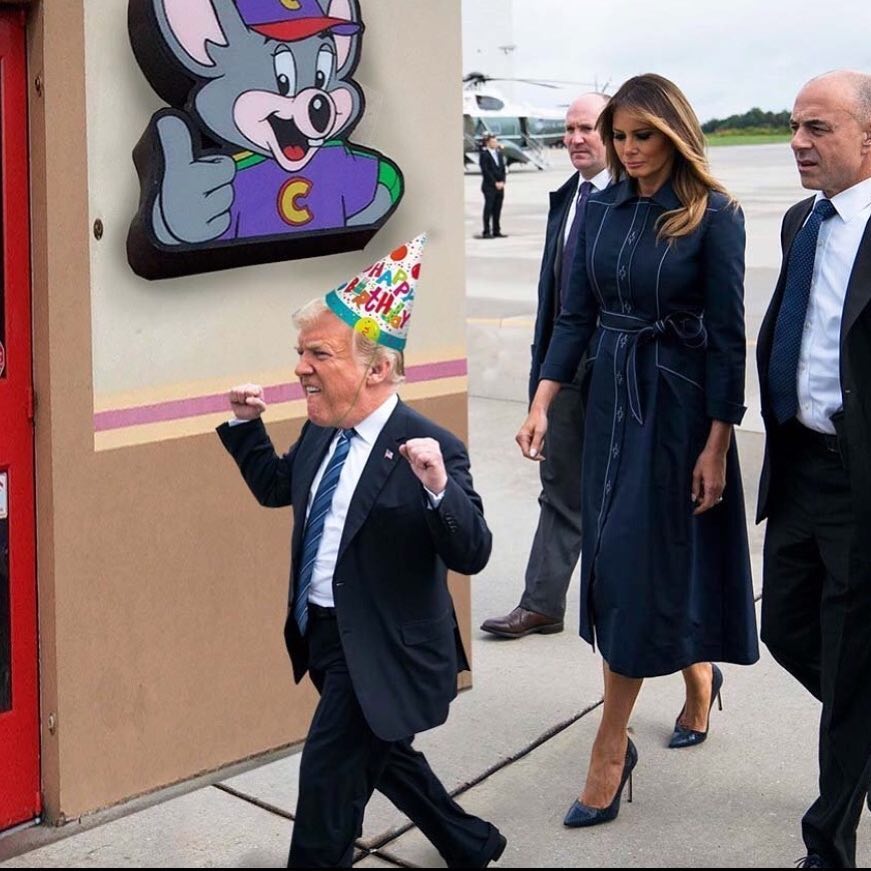 "So the whole Russia thing seems to have turned around," Trump can be heard saying.

It’s been pointed out that this is not a photo of what it says it is. September 11, 2018 is (was) overcast and rainy.

Donald Trump is facing widespread social media backlash after he was pictured greeting supporters with a triumphant double fist pump as he arrived to a 9/11 memorial service on Tuesday, the 17th anniversary of the terror attacks.—the far-left People Magazine

This is not an exclamation point day. This is not a fist pump day. You sully the solemnity of this day. History will not be kind to you. But we will #NeverForget those who lost their lives and those who gave so much to help so many on that day, and the days that came after.

Here he is at the Memorial in Pennsylvania.

There’s ample coverage out there about Trump’s numerous lies about what he did on and after 9/11, as well as his thoroughly inappropriate behavior around the subject ever since. I don’t need to rehash, but you can follow the links. But today’s inappropriate behavior? Here’s his first Tweet of the day. Note the emphasis on remembering the victims.

“We have found nothing to show collusion between President Trump & Russia, absolutely zero, but every day we get more documentation showing collusion between the FBI & DOJ, the Hillary campaign, foreign spies & Russians, incredible.” @SaraCarterDC @LouDobbs

Read this and pump your fist. Go ahead.

Donald Trump thinks that 3,000 dead after the hurricane in Puerto Rico last year was a sign of a great success. Folks in the Carolinas, please head for higher ground.

This one’s not about Trump

Because he’s not the only one.

As a nation comes together to mourn the anniversary of the worst terrorist attack in history, @JoeNBC sees an opportunity to score political points.

But then, one hour and forty-four minutes later.

Democrats would shut down the American comeback.

Republicans want to keep fighting for the American people like we’ve been doing for the last two years. pic.twitter.com/MtAveeedoY

Do I smell a certain — hypocrisy? — in the air.

Fact checkers have already said this is a lie, but that hasn’t stopped Hillary from joining Kamala Harris in pushing it. https://t.co/AMmvsXgV0G

Scroll down the thread a little, and you’ll find a video of Kavanaugh saying exactly what she denies he said.

I don’t know how a bunch of anti-Semites can be doing business with the Netanyahu government, and I’m pretty sure I don’t want to know.