About a quarter of the way through Walter Isaacson’s “Leonardo da Vinci,” I found myself suddenly in less than the proper amount of awe. After all, what is the deal with this guy who can’t finish a project?

But surely enough what seemed to be dilettantism became the actual makings of the genuine article, A Renaissance Man. Anything and everything that was in the world or beyond was subject to Leonardo’s insatiable curiosity and analysis. And so the famous notebooks on various subjects, each one with the explicit promise of becoming a world-shaking study on this or that, each one casually dropped aside as the next shiny new field of study presented itself. Things that would be major discoveries — two centuries later — were simply stuffed in a drawer.

But the things he learned along the way. Optics, anatomy, waterworks, astronomy, mechanics. He didn’t change the world, but he changed himself. And while he didn’t complete as many artworks as he started, each one was a painstakingly polished gem. The thing is, he wasn’t doing it for you or me or a wealthy patron or even posterity, it was just for his own personal growth.

One example is the fractionally finished “Adoration of the Magi.” 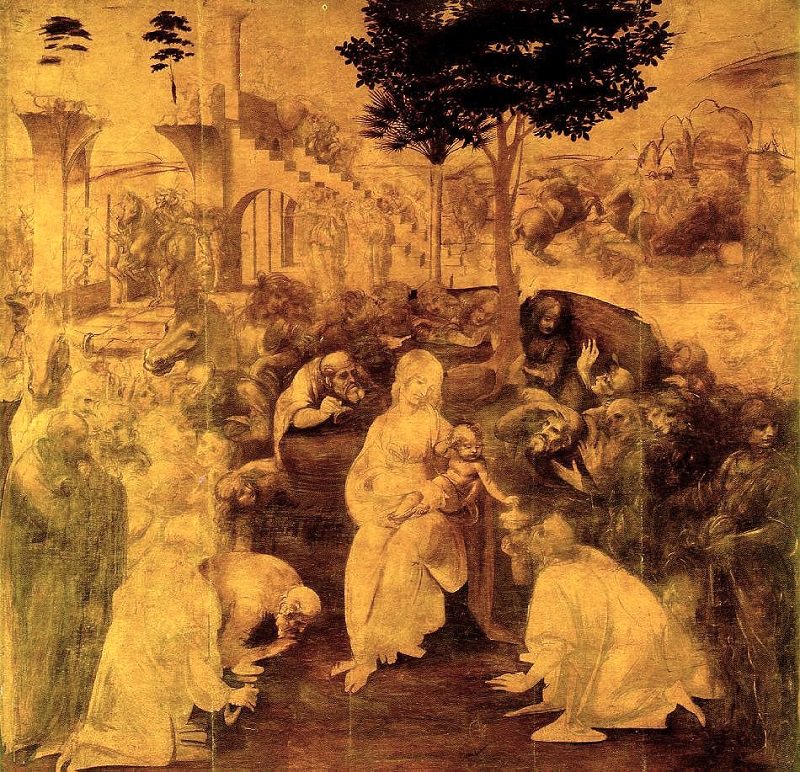 Why didn’t he finish it? The answer is apparently that it isn’t possible to finish it. His vision for what the picture should be just couldn’t be executed. He wanted each of the figures surrounding the Holy Family to have its own reaction and mood; and he wanted each figure to also reflect and react to that of its neighbor. The concept is cinemagraphic.

Meanwhile he poured tons of research into it. Botany, geography, lighting, perspective. He anticipated photography in some ways, or at least he anticipated Vermeer by a couple hundred years.

His last work is his most famous, and the most famous painting anywhere, the Mona Lisa. For this non-art student Isaacson’s description of what makes it great is perfect. Years of anatomical study — literally peeling skin off of corpses, dissecting the muscles and nerves — to find out how hands, arms, legs and faces work led to paintings that fool your eye into seeing something that looks alive.

The Louvre has a page where you can zoom in very close (much closer than you’d be able to get before security hauled you away) and see the finest details. Take the neckline of her tunic:

Or, the cascade of curly red hair.

Individual hairs, rendered as Dalí might have done with a single bristle brush.

Or the detailing of the veil (I didn’t even realize she had a veil).

Each carefully wrought with the utmost attention to detail. And then there’s her famous smile, and her noteworthy eyes. Imagine how Leonardo treats them…

The corners of her mouth, the edges of her lips, the shape of her chin — all are blurred. Purposely ambiguous. Depending on how you look at it, from which angle, or even where your eyes are focused, her expression changes. Try this: 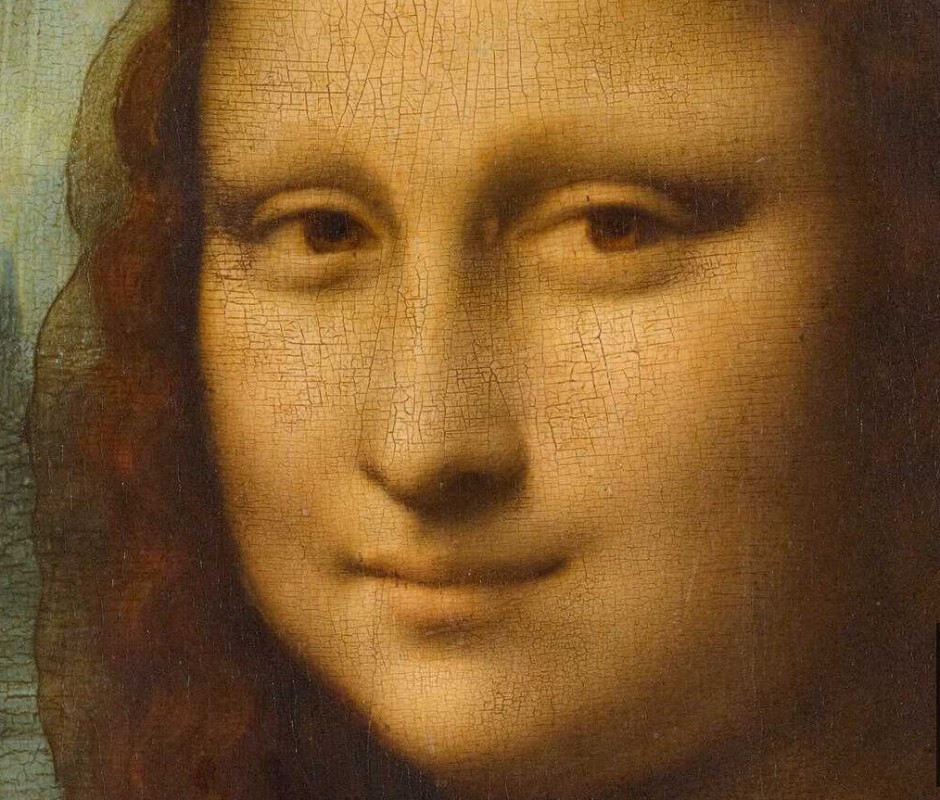 It takes a little concentration, so bear with me carefully. Look directly at her mouth, and make a mental note of her expression.

Then look directly at her eyes, and without shifting your gaze make a mental note of her expression.

If you see what I see, she’s rather neutral in the first instance, and positively smiling in the second.

Also her eyes have a way of following you around.

The moral of the story? Never stop asking questions, never stop being interested, never stop drilling down another level or two.