Last night cooking dinner I was chopping up an onion, something I’ve done countless times, and experienced a strange sensation. My eyes started burning and watering.

Why is this unusual? That’s the subject of today’s science travelogue. If you’re a geek like me and love reading science fiction and watching Star Trek you’ve probably had the thought, “it would be so cool to live in the future.” Well big news, to a large extent we already are.

Not just the intertubes and having the world’s information, disinformation and news real and fake at your fingertips. Modern medicine! Let’s get started with a little background.

A few years ago my optometrist told me I had the beginnings, and probably in five or so years I’d want to have them fixed. The time came a little sooner than I thought. I was having trouble reading unless the light was really bright, my night vision sucked, and driving at night in the rain was alarming the spouse.

Cataracts kind of suck. Your eyes have this little things called the “crystalline lens” right up front. They are, well, lenses, which focus the light onto you optic nerve in the back of your eyeball. Wait a minute, let’s back up a little.

If your eyeball isn’t quite round, the light doesn’t focus on exactly the right spot and everything will be fuzzy, like a pair of binoculars that aren’t in focus. If your eye is shaped more like a football than a basketball that’s astigmatism, and your field of focus is going to be limited to a small area of your total field of vision. 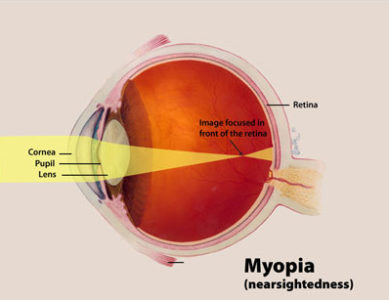 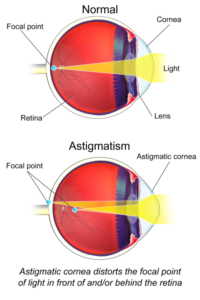 When you’re both nearsighted and astigmatic you’re very glad you didn’t live in the 13th century. I’ve been wearing glasses since I was about six years old, and switched over to contact lenses when I was 21. Hard lenses originally, then daily-wear soft lenses, then extended wear. Later on I used “monovision,” where one eye wears a prescription for distance, the other for close-up work like reading. It takes your brain a day or two to adjust, but it mostly works. Until your eyes age a little further and the prescriptions are too far apart to focus on anything comfortably.

Plus it’s a fact of life for those with poor eyesight that wherever you go you have to be sure you’ve got glasses and/or extra sets of contact lenses because if you find yourself in some other country with 20/200 vision you’ve got a real problem.

These organic crystalline lenses can cloud up and turn yellow over time. And there’s nothing to be done. For centuries there were painful and ineffective treatments, sometimes with fatal results.

After surgical procedures became more sterile and professional, the method of choice was to simply remove the clouded lens and have the patient wear really thick glasses the rest of their lives. During the second world war, one British doctor noticed that pilots who had their acrylic windscreens knocked out, sending fragments into their eyes, didn’t suffer infections or rejections the way pilots would with a glass windscreen. He figured out that the human eye is tolerant of that clear hard material, and further had the inspiration that specially crafted pieces of it could be used to replace the removed cataract.

Still the procedure difficult and the recovery arduous.

Today using lasers, microscopy, ultrasound and a few other modern tricks the surgery takes a few minutes under local anesthesia, and the patient is pretty much good-to-go the following day. Instead of a hard acrylic lens, a thin polymer is inserted into a tiny slit and unrolled inside the capsule. The small slit lets it heal faster and makes it less prone to accidents. Still though you have to guard it, use a cocktail of steroids, antibiotics and anti-inflammatories for a couple of weeks. But the results are truly science fiction come to life.

What’s This Got To Do With Onions?

During my 40 or so years of contact lens wear the lenses somehow shielded my eyes from whatever chemicals a chopped onion releases into the air. If you think about it it doesn’t make any sense because the lens isn’t over your tear ducts or anything. Nevertheless with contacts I never wept even once over a cut onion.

The run-up to having it done takes a while. You’ve got to not wear your contacts for at least a week, to let your eyeball “rebound” to it’s normal shape. Then they take a long series of tests and careful measurements. These include the exact size and shape of your eye, glaucoma screening … anything that affects the biologics of your eye.

Then you have to decide what kind of lens you want. Chances are your health plan only covers a plain-vanilla replacement, which means your cloudy vision will clear up and your night vision will be way better, but you’ll still need corrective lenses. There are other more expensive choices for which you’ll have to pay some out-of-pocket costs. One would correct my nearsightedness, but I’d still need glasses for the astigmatism. The most pricey of all, the “toroidal” corrects both.

The surgery itself takes about eight minutes and is as difficult as a deep-cleaning session at the dentist. If your dentist was in the business of doing eight-minute deep-cleanings one after the other after the other all day. They dope you up, put lots of drops in your eye, cover you up except the eye they’re working on, and do their thing. I know a lot of people get creeped out by eye-related stuff and even though they gave this post up a long time ago I won’t go over it here.

Suffice it to say you walk out slightly wobbly from the drugs with one eye patched over. After three or four hours you’re allowed to remove the patch and see the new world.

Two or so weeks later (for obvious reasons they don’t do them both at once) you’ll have the other eye done. 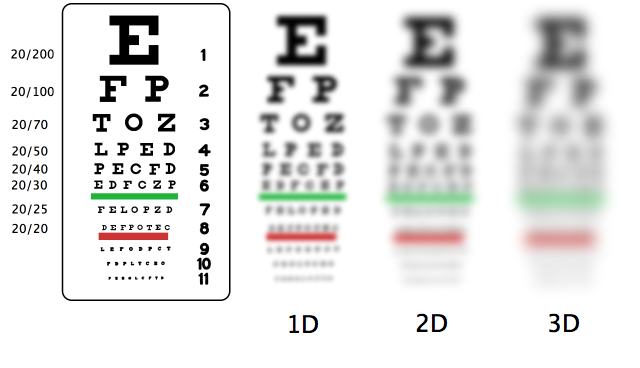 I’m four days out from the second surgery and I’m totally not kidding when I tell you that my vision went from 3D in the diagram above (or maybe worse) to the far left column. For the first time I can remember I can move around without corrective lenses and it’s just amazing.

Yesterday I went back for a follow-up and an eye exam. I have 20/15 vision in both eyes!