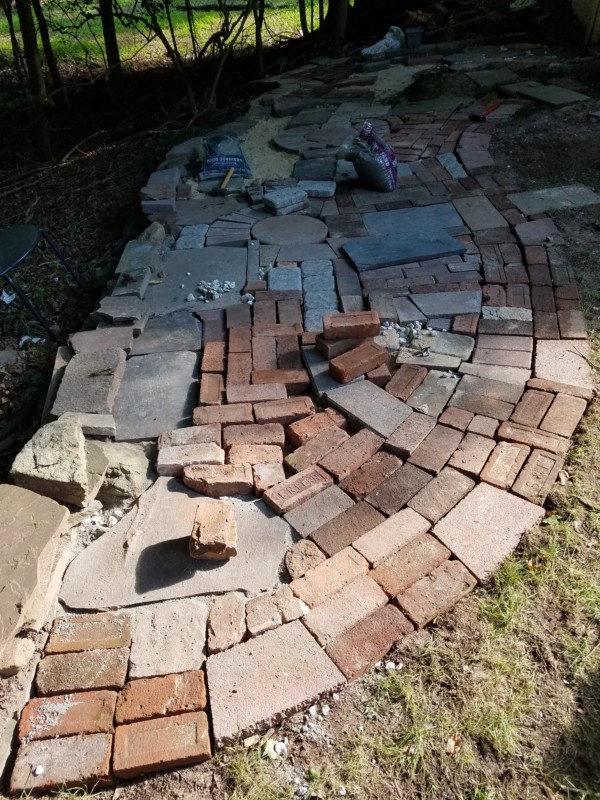 In Christopher Alexander’s A Pattern Language, one of his chapters is Site Repair.

Buildings must always be built on those parts of the land which are in the worst condition, not the best.

Because of course, you’d destroy the best part of the property in the course of construction, but still have the worst. So we were faced with a section of the yard which, even after last summer’s epic struggle to plant a lawn, still was dark and unappealing. 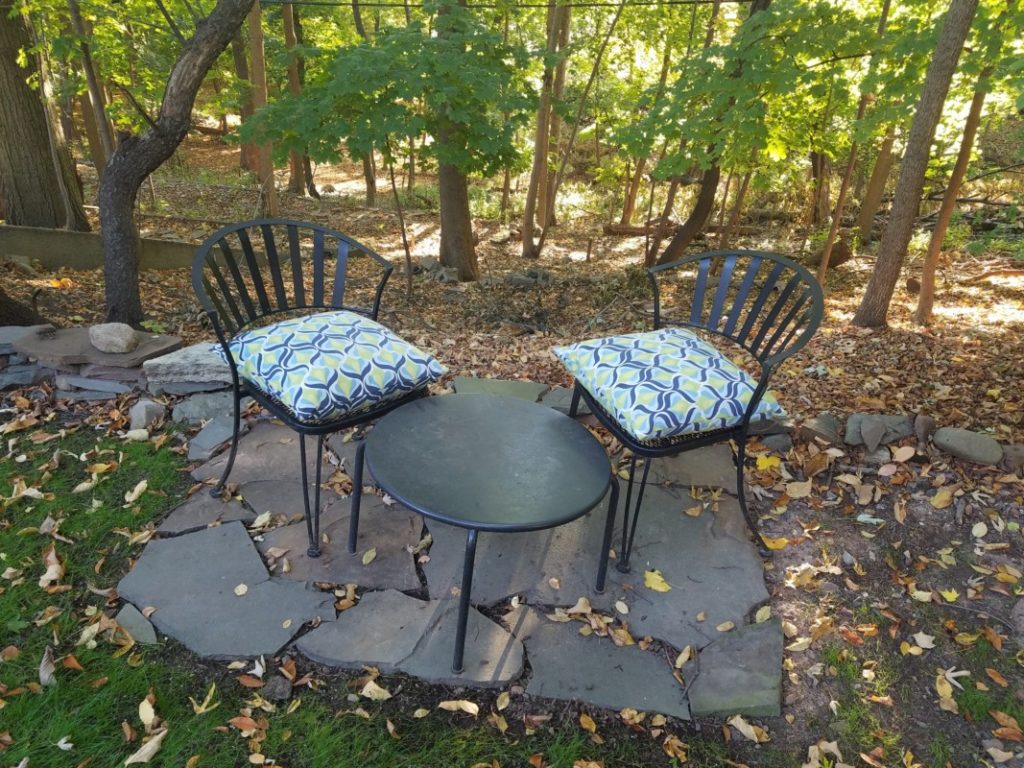 Uneven and kind of wet, the ground had sagged right there and the shade was too deep even for our deep-shade grass seed.

The “upper patio” hosts a large table seating six, with an umbrella, and the grill. It’s also home to a planter full of herbs, and is close by the garden. We’ve been working hard on filling in the gaps there: 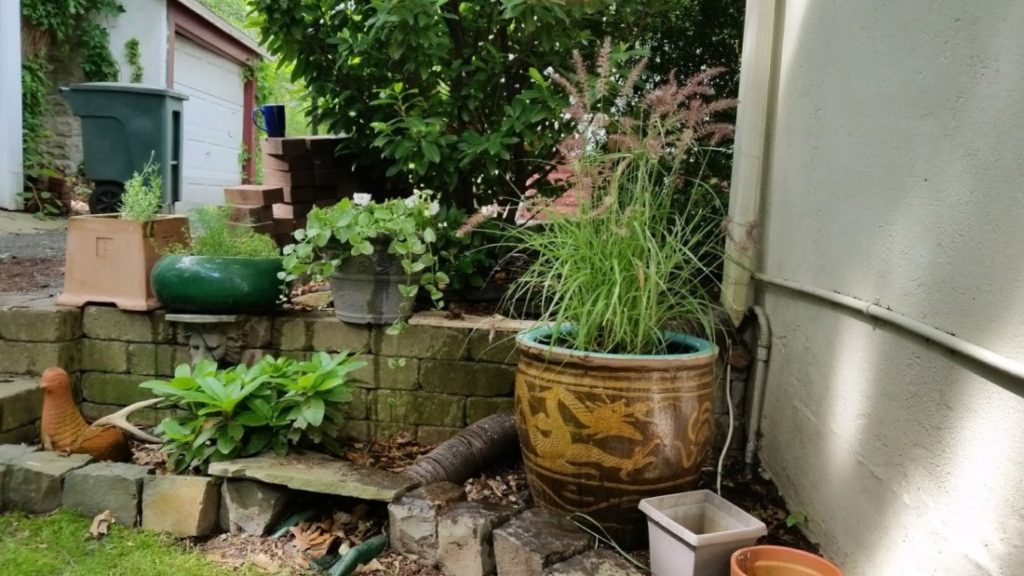 The proverbial “ton of bricks” fell (not literally) into our laps. We already had a small amount of slate of varying thicknesses, and a few other pieces of random flattish stuff we could use. Being the kind of people we are, a simple boring and easy rectangle was not what we wanted. Not knowing (or caring) about the complications it would lead to, I began by laying out a sweeping curve of bricks and trapezoidal corner stones. 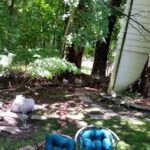 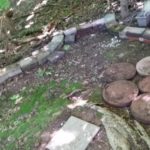 Our handyman also provided a few sacks of fill soil. The rest was a bunch of trips over to the home of the person giving away free bricks, Home Depot and Lowe’s for additional kinds of stone, plus paver footing mix and sand.

The usual directions for building a patio feature flat, rectangular surfaces. Flat was out-of-the-question, and we dispensed with rectangular right out of the box. But still, within reason, it was necessary to make the framing-out as cleanly horizontal as possible, and when the gravel/sand was applied to make sure it was tamped down and smoothly regular — within the boundaries of the undulating ground. I used a two-by-four to sweep the materials across, then tamped them down hard with some of these large (and heavy) circular pavers. For some smaller areas, I pounded it down with another brick. 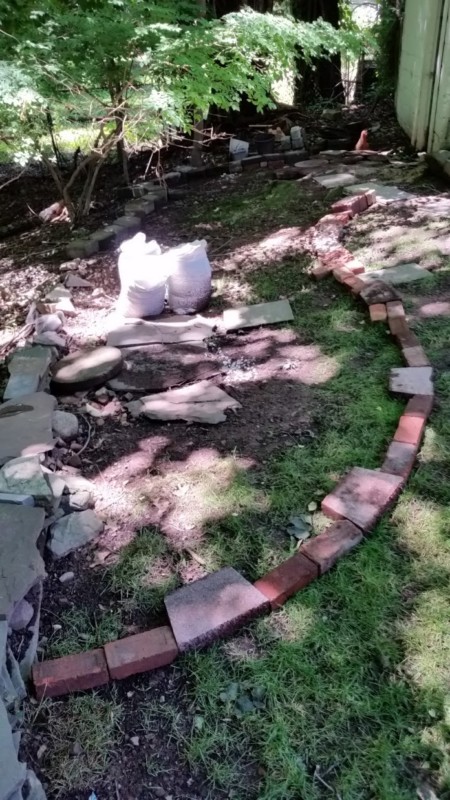 We ended up with three kinds of red bricks, trapezoid shapes in two colors, square and rectangular light terra cotta blocks, a couple of pieces of white marble we took from a creekside in Manchester, VT, a few big circles, some pie-slice shaped wedges, three colors of slate, some Belgian blocks, and some colorful pebbles. Clearly this wasn’t going to be a anything square. We were going to go totally organic.

Fortuitously (there’s a lot of that in this project) a local guy and his dad were advertising on NextDoor looking for some yard work. Thank you, you saved my lower back. They helped a lot in laying down some of the foundations. 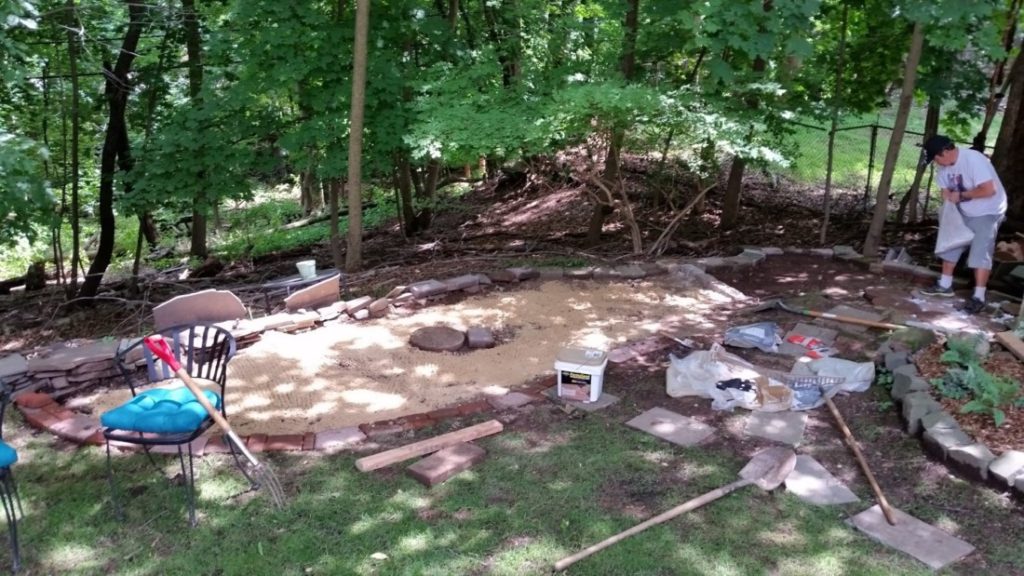 I started by following the path we had and extending it into the new patio space. Beginning with one of the circles, I started building out a “broken symmetry” pattern. It started to look pretty Aztec or Native American.

All of this is just being roughed in, mind you. But block by block we started to fill out the space. By the way — broken chunkc of brick are great. I’m glad I took a lot of them because we had many odd corners and bits of curve to fit together. Here is a little of the progress.

One major issue along the way was that the materials we were using were all of different heights. So the careful smoothing out of the sand bed was meaningless when you had to place a 1/2″ thick piece of slate next to a 2 1/2″ thick brick. Some of the items, such as the Belgian blocks, were thicker than the bricks, so I had to excavate out. My solution for the thinner slate was to build a sort of box out of the surround bricks, then fill it almost to the top with gravel and sand, compacted tightly, adding more until I had enough for the piece to sit level with its neighbors.

Also, a rubber (or wooden) mallet. Bang each piece to really set it down in place.

Another issue was the very irregular edges on some of the pieces of slate. These had been broken off of much larger pieces, and after struggling for a while trying to find a way of aligning them with other blocks I decided to have them hang off the back edge, and simply move the un-mortared stone wall behind it forward a bit to cover the edges up. 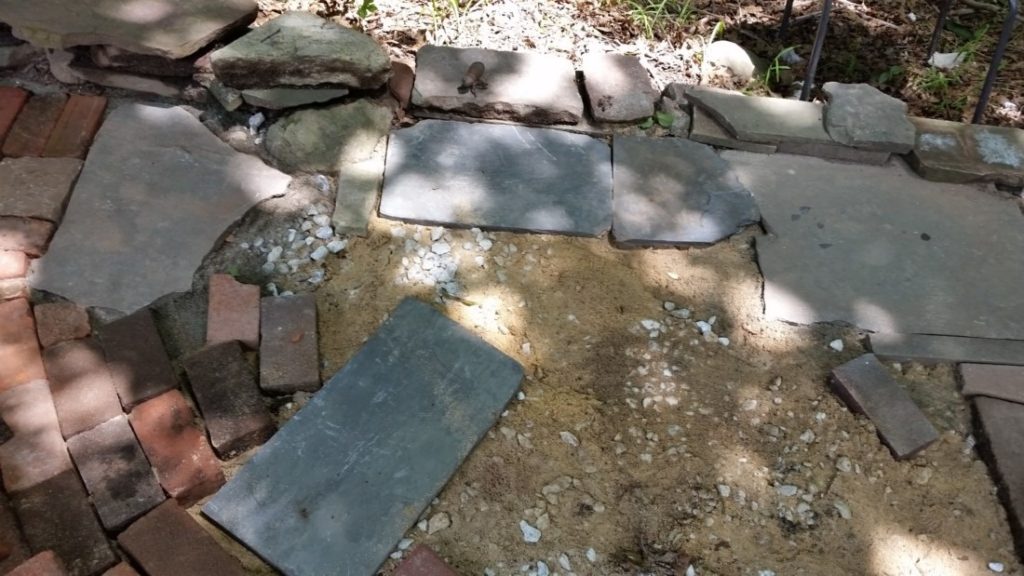 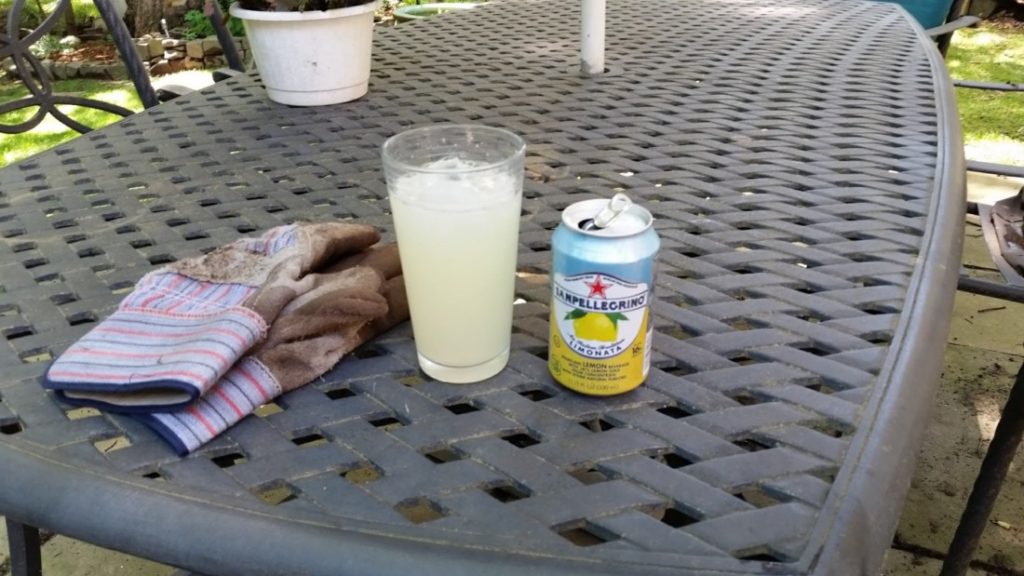 And So We Went…

Until we had the whole space filled up. You can see the evolution and rethinking as we went. The second circle, for example, the one on the right. E. thought we should get more “darts” and make the rays go most of the way around. That worked great. Some of the pieces of slate moved from place to place while we got them to fit, and also to provide a better visual balance. We also reconfigured the lower level (which will eventually lead to stairs down into the woods) to better utilize the materials we had.

Then the finishing touches.

Not quite the finishing touches

The last day was crazy. I thought I’d go out around 11 on Saturday morning and be done by 1, 2 tops. But once I started levelling all the bricks and blocks that weren’t quite right, repositioning a few others to maximize coverage, and several other completely compulsive behaviors it was mid afternoon by the time we got here.

Time to fill in all the gaps! We had a small amount of river stones, which we used to advantage in some of the bigger gaps. The rest of the bigger spaces we filled with yellow and white pea-sized shiny gravel. We also had a few larger river stones ones, that we treated like Easter eggs.

Then it was time to fill in all the rest of the gaps with polysand. 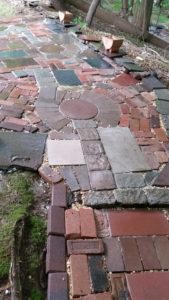 The last step with polysand is to gently mist it from the garden hose, so that it all sets. It also is really shiny for a while. We let it set up for a while, and then for fun put the chairs and table out for a look. There was an unsatisfying amount of grit that settled on the surface (it rained a little after we finished), plus some mud was starting to come down the hill, over the border, onto the slate.

But that wasn’t too hard to square away. I went out the next day and reset some of the lowest edgers so that they were raised on the outside, and I’ve also planted new grass all around.

We put a few pieces of furniture out, and there you go. 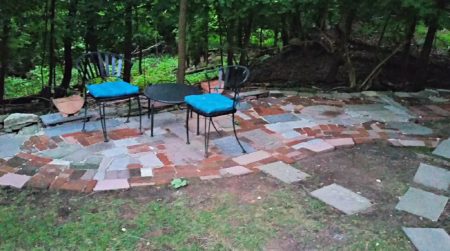 But Big Difference, No?