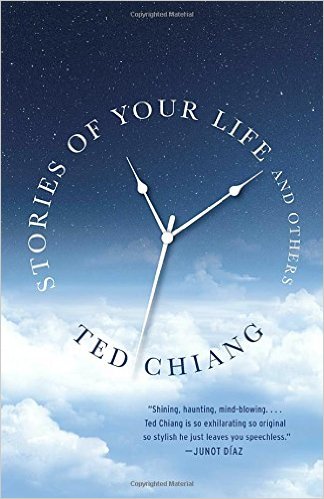 I’m telling you, my Kindle Unlimited account is the best thing since sliced bread. And if you’re on a gluten-free diet, it’s even better than that. But I digress.

Stories Of Your Life (And Others)

First up, my favored airplane reading last month is Ted Chiang’s “Stories Of Your Life (And Others).” From this collection of short stories, one, “Story of Your Life,” was the source for last year’s film “Arrival.” While the movie was IMO sensational, the book is rather different and sensational itself, in a quiet way. Leaving aside the differences which, once you get down to it, are mere details, it shares a common thread with the movie.

If we’re really put to the question, is our language a derivative of the way we experience reality? I know, not something you’re likely to see on Jeopardy, even if it were in the form of a question.

But what if, instead, the way we experience reality is in fact derived from our language? The heroine of both the book and the movie learns the alien’s language and in the process gains an incredible new power, one that users of Earth language do not — can not — have.

Each story in the book is the product of a similar tactic: take a scientific theory or cultural given, and turn it on its head. In “Tower of Babylon,” curved space meets the Tower of Babylon. In “Division By Zero,” too much time spent with irrational numbers can make you mad.

Another of the best, “Seventy-Two Letters” explores the ideas of the Kabbalists, who believed that the right combination of symbols could animate dead matter. Well, what if it could? Modern equivalents of Bitcoin miners search for combinations of seventy-two Hebrew alphabet characters that give certain desirable characteristics to inanimate matter, and in the process an entire industry is formed. Modern life is enhanced not by information technology, but by something indistinguishable from magic, granting us housecleaning golems, soldier golems and more.

The brief “The Evolution of Human Science” takes the idea of those golems a step further, where we’ve created “metahumans”; they become the scientists of the future. Created by humans, the science metahumans develop is utterly incomprehensible to us. And so, scientists of today work to develop explanations of metahuman science that is understandable to regular humans. And “Hell is the Absence of God” poses the hypothetical, what if angels and angelic visitations are real and relatively common events? What is their blast radius when they pour out of the heavenly sphere to perform fiery miracles in our presence, and what happens to the bystanders? Is Hell real? Everybody knows it is because visions of it appear regularly under the ground beneath our feet.

Totally different from the above, yet another take on the worldwide zombie horror catastrophe. This one by British author RR Haywood, it’s badly edited, full of typos, and completely irresistible. It’s now up to something like 23 volumes (each represents a day, starting from the first night of the zombie infection), and a few short stories.

It follows the story of Howie, a supermarket manager of the night shift, who barely escapes the outbreak. Over the course of the first few days he hooks up with Dave, a former special forces operative (actually, he’s more lethal than that) who happens to be on the spectrum. Then Clarence, then Paula, and a series of adventures that take them to locked up prisons, drug lord-controlled housing projects, abandoned Victorian-era forts on the southern coast, adorable thatched-roof towns in the countryside that have been rendered zombie-controlled wastelands, and you get the idea. The set pieces where the heroes are faced with increasingly large crowds of shambling undead horrors get larger and more complex, but their inevitable successes are always creative.

Not only that, but there are now different types of zombies. They’re not all dead-brained — some can think; some of them pretty well. Some of them can pass for human.

Unlike the well-known graphic novel series, this one is really graphic, in a way you couldn’t have sitting on a bookstore shelf waiting for some innocent seven-year-old to see. Haywood’s storytelling momentum is positively kinetic. 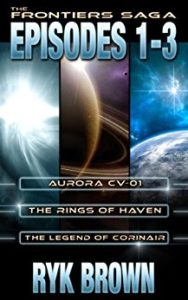 The premise is, three hundred years from now everybody who is hip has these implants, sort of like Google Glass only inside your skull so you don’t look like a dork. And some hacker develops a virus that infects them, transmitting itself both by wireless signals but also by triggering your brain to create copies the virus so it can be transmitted through the air.

It’s very nasty indeed and 90% of the human race dies, the rest are thrown back into an agrarian society for the next thousand years.

Then a trove of information is discovered buried under the Swiss Alps, and technology races forward at an incredible pace. Remember those space travelers who fled Earth in a panic when the plague started? Of course not, I didn’t mention them. Anyway, once the plague started, space travelers and residents of colonies on other planets high-tailed it away from Earth as fast as they could. Over the course of a millenium, mother Earth became little more than a legend. And then the real Earthlings started showing up.

However, our cousins on other worlds were way ahead of us in some ways.

Like “The Expanse” and “The Undead,” this series has craftily written plots and nicely defined characters, and the don’t waste your time.

Unless you think reading this kind of pulp is a waste of time in the first place. In that case, stick to “Stories of Your Lives.”