Things To Know In Barcelona

The bottled water here is amazingly inexpensive. Just this morning at the Carrefour on La Rambla I got 5L jugs for 0.66€. Which is good because the tap water is horrible. It won’t get you sick with dysentery or anything, it’s just gross.

The wine here is amazingly inexpensive. That listing on your menu for a house rose for 6€? That’s for a bottle most likely. And at the supermarket, you ask yourself, “what kind of wine can that possibly be, that they’re selling it 2 for 5€?” Not bad at all, actually.

Our host warned us about the bread and she was right. It looks good in the bakery but it’s no exaggeration to say it’s stale by the time you get it back to the apartment. They probably love Pan e Tomat here so much just because it’s a way of making the stuff edible.

Incredibly inexpensive, and great. Swordfish for 5€ a kilo??

Should be Las Ramblas. There’s another one over in El Raval. It’s shorter, only a few blocks, but just as shady and full of tables where you can sit and have a drink and a few tapas. And it’s not overwhelmed with tourists. Very quiet, actually, mostly full of locals.

The big one on la rambla grande, the Bouqueria, is called “Disneyland” by some. But it’s not derogatory at all. It’s beautiful, crowded, and a feast for the eyes. Well worth a look. But if you’re stocking your kitchen for a long stay, as we are, and want fish, vegetables, and meat, you want the Santa Caterina a few blocks from the cathedral. There’s also a great (cheap) tapas bar in the back left corner.

Affordable and well-organized. The Metro is easy to understand, and so are the out-of-town lines. We took a trip to Figueres, and on the way up we took one of RENFE’s “MD” trains. It was cheaper, but slower and filled with lowlifes making a lot of noise and begging for spare euros. On the way back we took the much faster Regional train, which was in every way better. Cabs are good, too. Cabbies appear to own their own cars. When was the last time you saw a NY cabbie polishing his headlights with Windex? Never, that’s when.

If you’ve got the time, you can’t beat walking. You get to see everything along the way.

If you’re there more than a few days, and you’re digging the cathedrals and ancient churches plus you love the outdoors, take the trip to Montserrat. You’ll wish you’d booked a room to stay over and spend two days there. Speaking of cathedrals, they’re wonderful in the Cuitat Vella. From the Main Cathedral, to Maria Del Pi and Maria Del Mar, to Pau en Camp, wander into any of them and you’ll see wonderful things.

A walk up Monjuic is nice, but go via the gardens on the Poble Sec side. You can skip the Olympics site. It’s just a vast open plaza surrounded by closed buildings. It looked great on TV in 1992, but in person it’s pretty sterile. The fortress at the top is worth seeing, and then you can take the cable car down to the beach.

The Musee Picasso is free Sunday afternoons. The line looks daunting, but it moves quickly and once inside it’s not crowded. The Fundacion Miro, on the aforementioned Montjuic, is also a splendid visit.

Has someone you know told you that La Sagrada Familia is not worth going into? They’re several years behind the times. It’s breathtaking.

Far and away, Can Ros in Barceloneta. Their 12€ prix fixe was creative, original, artistically presented and impeccably fresh. I still think about that Octopus Salad. I hear their paellas are amazing, but we didn’t go for that. Next time. 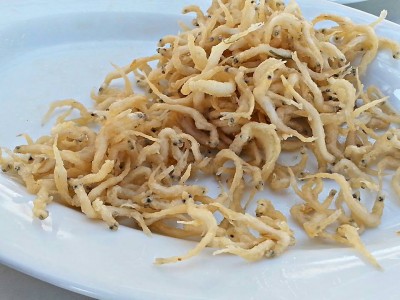 Next up, Vitaminas del Mar at Port Olimpic. They had the single most amazing dish, the fried small fish. We spent hours lazing under the slatted roof enjoying the sea breezes and a pitcher of sangria.

Speaking of small fish, Restaurant Bo! also did it great. Elyse loved her deconstructed sandwich of baccala fritters and romesco. On the same square as Bo!, at the western corner, was a little bar where we had quiche for lunch. Best crust on a quiche I can remember, but they’re not on the Google and we paid cash, so I can’t find it.

And Meson David in La Raval, close to the Av. Parallel, offered a down-hown, well-prepared meal. The proprieter is a great guy, and his no-label house rose (at 6€ a bottle) was terrific. The place has been family run for something like a hundred years.

And the “other” Rambla, Rambla de Raval, is lined with good places. We ate at one on the western end, and I can’t remember which it was, but it was really nice. We also ate at two different Turkish kebab joints on that street, and they offered the best cheap lunch around.