I think anyone who has spent more than 90 seconds with me the last couple of months knows that I’m a fervent advocate of canonizing the novel Cloud Atlas. So how does the new film stack up? 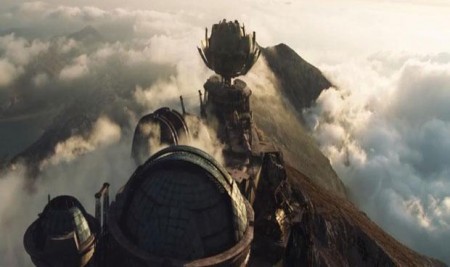 Well we stayed up until past one in the morning talking about it, so that’s something. As I stressed in my book review, there are myriad ways of looking through this prism of a book. The movie? It’s certainly one of them. And I mean that in a good way.

A book gives you the opportunity to go back, bookmark, cross-reference, re-read, skip ahead. A movie on the other hand has to be a linear narrative, So while there are (at least) three ways of reading the novel, you only get one shot at a movie. Perhaps in the future a hypertext movie that rearranges the scenes in a different (logical) order every time you view it will be possible. But for now, this is it.

It’s a fairly faithful telling of the stories. A couple of significant themes got left out; a few others not in the book were put in. Such is the nature of two media working at cross-purposes. I did find the purpose of the observatory at the climax of the movie to be a little disappointing, being a little too much sci-fi at the expense of a poetical musing on the fall of mankind.

I’m being noncommittal. Sorry. Go see it. It’s beautiful. Halle Berry is perfect as Meronym. Not so much as Jocasta, but spectacular as Luisa Rey. Jim Broadbent hits so many right notes, not just as Ayres but as Cavendish.

I’m not absollutely crazy about Tom Hanks in some of it. Obviously he’s way too old to be Zachary, if you’re going to take the characterization in the novel seriously. But he’s a very good Dr. Goose, and hilarious as Dermot Hoggins.

Hugo Weaving is an evil genius, isn’t he?

Beautifully filmed in all its aspects, the stress leans more towards the action-film aspect of the stories rather than the psychological/philosphical film. But that’s perfectly reasonable because you only get to make one.

There’s very good reason for this winning Oscars. Many of the opening scenes made me gasp at their beauty.

Regular readers won’t be surprised that that’s a photo I wish I’d taken.

The additional features on the disk tell of how they traveled a couple of hours and stood in the dark for a few more, waiting to get some of the landscapes. The one above is a train slowly moving across the distance. There’s another of a line of trees seen through the fog that I’d like to hang on the wall, but I can’t find it on line. I guess you’ll have to watch it.

Hoffman wears Capote like a snugly tailored tuxedo, and after I picked up a copy of In Cold Blood I could hear his voice in many sentences. Not as the prissy, lisping Capote of his later years, but as a man of utmost precision and calibration of language.

It tells a story that the novel of course misses, the story of how the novel came to be, and Capote’s intense relationship with the perpetrators. Well worth owning.

Speaking of missing the philosophical boat, there’s this one. Gwynneth Paltrow loses her job, misses the subway home, and so misses the spectacle of her live-in boyfriend shagging another woman. The movie splits in two here. 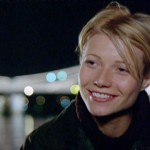 When she discovers the tryst, she walks out, changes her hairstyle and her wardrobe, and changes her professional life for the better. When she misses out, she sticks with the schlump (even as he continues trysting) and falls back on waitressing and sandwich delivery gigs.

Need I tell you the end of each is ironic? Don’t worry, no spoilers here. Our problem with this is that it offers a really good chance to observe the ramifications of small actions. Missing a subway train — who knew? It could lead either to a successful and happy life, or one of failure and misery.

The distraction is the characters. In a way, they’re too strongly drawn. The miserable boyfriend, in particular. He is just so dull, unattractive, inarticulate and basically a failure in everything that we spent half the movie wondering what the hell these two strong women were doing with him in the first place, let alone why they are doing it without contraception. 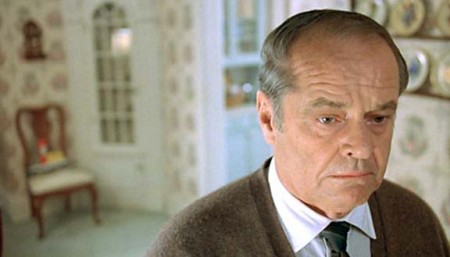 Don’t get me wrong, I love Jack Nicholson usually. I was a little skeptical about this one because — judging a DVD by its cover — it looked like another opportunity for him to engage in his worst mugging. But this is a thoughtful and insightful movie that deserves more play than it gets.

Schmidt is a successful insurance executive in Omaha who in rapid succession retires, finds his wife dead of a sudden heart attack, and sees his daughter move along marrying a man he doesn’t approve of.

Major life events, to be sure, but things everyone faces at one time or another. How it plays out for Schmidt is that he’s a man used to being needed and wanted, and now all of those people he used to support have moved on. So the story is mostly about how he adjusts to being a person without responsibilities, after being responsible for so long.

It’s a touching story, and worth a look. 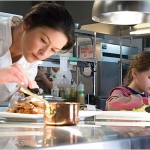 And now for something completely different. A fluffy souffle of a movie (and isn’t that a dreadfully tired cliche, but so is the film) with a backbone of off-stage tragedy. But it’s cute, funny and has a lot of Catherine Zeta-Jones. So waht else do you want?