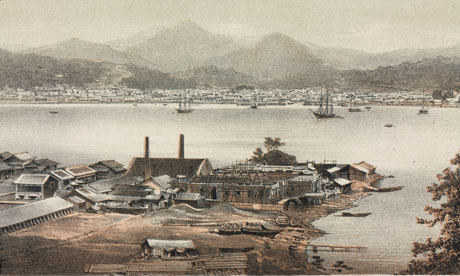 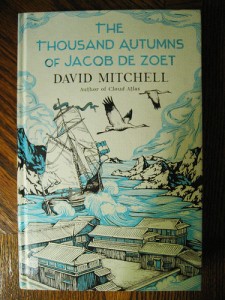 As the 18th century becomes the 19th, David Mitchell’s book reflects in vivid detail the Dutch East Indies Company as it sunsets, decades before Japan is finally opened up for good.

Besides being a fascinating historical novel of a vanished insular culture, it’s a lovely romance with vivid action sequences. The assault upon the Mount Shiranui Shrine. The battle of wits between Magistrate Shroyama and the Lord Abbot Enemoto. Jacob’s standoff with the Phoebus. And of course it’s the story of the ultimate fate of Orito and Jacob. 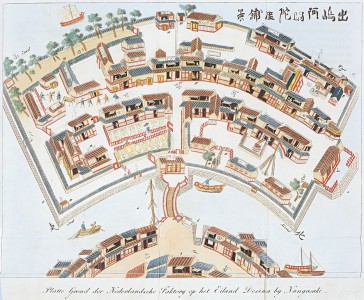 The Dutch have a beachhead at the port of Nagasaki, where the rules the Japanese set for them (and for themselves) are impossibly strict. The Dutch are confined to a small island, Dejima, connected by a locked bridge. During trading season the gate would be opened and select individuals would be allowed passage to-and-fro.

Jacob de Zoet is a too-honest Dutch employee, who runs afoul of some powerful people and becomes allies of a few others. He falls in love with a damaged beauty, Orito, who is a skilled midwife with ambitions to become a doctor — extremely ambitious for a woman in that time and place.

The island was real, by the way, though it’s long been filled in, reconnected, and expanded. It’s hard to tell precisely the outlines, but clearly “Dejima” is here:

Orito is cruelly taken away to be a “nun” in a “shrine,” where a Japanese interpreter who is also in love with her hires a crew of samurai to try and rescue her.

Meanwhile, Jacob has been stranded while his enemies blackmail him and force him to stay confined to the island until the next trading season, which may never come. The English move in to try and take control, leading to a well-done strategic showdown between the outmanned and outgunned Japanese, Jacob and the really-very-likeable British captain.

The coda condenses into a few pages the rest of Jacob’s long life, closing with a melancholy paragraph of a ghostly visitor to his deathbed. It reminded me of the closing of Cormac McCarthy’s “Cities of the Plain,” which was actually the best part of that book.

I’m getting a sense now of Wallace’s interests. Other lands and other places, cultures real or invented that are extremely different from our own, the prisoner who is freed, the unexpected enemy and the unlikely ally, the fish out of water and the arc of history bending towards justice.

As in “Cloud Atlas,” Mitchell does a worthy job of finding the voice of a different time and place. But I loved this long paragraph towards the end.

Gulls wheel through spokes of sunlight over gracious roofs and dowdy thatch, snatching entrails at the marketplace and escaping over cloistered gardens, spike-topped walls, and triple-bolted doors. Gulls alight on whitewashed gables, creaking pagodas, and dung-ripe stables; circle over towers and cavernous bells and over hidden squares where urns of urine sit by covered wells, watched by muledrivers, mules, and wolf-snouted dogs, ignored by hunchbacked makers of clogs; gather speed up the stoned-in Nakashima River and fly beneath the arches of its bridges, glimpsed from kitchen doors, watched by farmers walking high, stony ridges. Gulls fly through clouds of steam from laundries’ vats; over kites unthreading corpses of cats; over scholars glimpsing truth in fragile patterns; over bathhouse adulterers; heartbroken slatterns; fishwives dismembering lobsters and crabs; their husbands gutting mackerel on slabs; woodcutters’ sons sharpening axes; candlemakers rolling waxes; flint-eyed officials milking taxes; etiolated lacquerers; mottled-skinned dyers; imprecise soothsayers; unblinking liars; weavers of mats; cutters of rushes; ink-lipped calligraphers dipping brushes; booksellers ruined by unsold books; ladies-in-waiting; tasters; dressers; filching page boys; runny-nosed cooks; sunless attic nooks where seamstresses prick calloused fingers; limping malingerers; swineherds; swindlers; lip-chewed debtors rich in excuses; heard-it-all creditors tightening nooses; prisoners haunted by happier lives and aging rakes by other men’s wives; skeletal tutors goaded to fits; firemen-turned-looters when occasion permits; tongue-tied witnesses; purchased judges; mothers-in-law nurturing briars and grudges; apothecaries grinding powders with mortars; palanquins carrying not-yet-wed daughters; silent nuns; nine-year-old whores; the once-were-beautiful gnawed by sores; status of Jizo anointed with posies; syphilitics sneezing through rotted-off noses; potters; barbers; hawkers of oil; tanners; cutlers; carters of night soil; gatekeepers; beekeepers; blacksmiths and drapers; torturers; web nurses; perjurers; cutpurses; the newborn; the growing; the strong-willed and pliant; the ailing; the dying; the weak and defiant; over the roof of a painter withdrawn first from the world, then his family, and down into a masterpiece that has, in the end, withdrawn from its creator; and around again, where their flight began, over the balcony of the Room of the Last Chrysanthemum, where a puddle from last night’s rain is evaporating; a puddle in which Magistrate Shiroyama observes the blurred reflection of gulls wheeling through spokes of sunlight. This world, he things, contains just one masterpiece, and that is itself.

That about covers it, doesn’t it? It’s worth another read, slowly. The rhythm of the 4, 5 and 6-syllable phrases is musical.

It’s not nearly as interesting as “Cloud Atlas,” which after all has six stories to match just this one, but once it gets going it’s more than interesting enough.