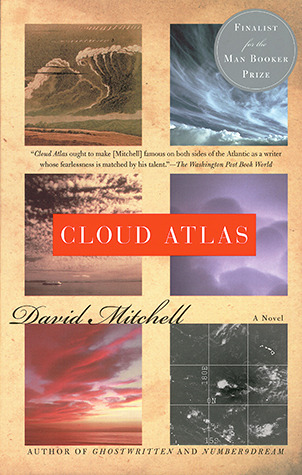 When I was a music major, Form and Analysis was one of the classes that served me best. I still use a lot of those principles when I get a new score ready for rehearsals. And in general I’m a sucker for a work with interesting structural properties.

Andy why just music? Books too. One of my favorite books ever is McCarthy’s “The Crossing,” with its three-part repeated structure punctuated by parables that reflect on the broader action.

So David Mitchell’s “Cloud Atlas” is obviously right up my alley.

The book is made up of six stories, separated by hundreds of years, and written in the tone and manner of the period (real or imagined).

There’s the Pacific Journal, with its themes of colonialism and racial hierarchy, written in a style reminiscent of Melville.

Letters from Zedelghem is a gossipy drawing-room romance/tragedy, full of itself and of just-so witticisms. Themes of the time between the world wars play out in-between. The aristocracy is riding out their final years before all hell breaks loose. A musical composition, “Cloud Atlas Sextet,” is written.

The “Ghastly Ordeal,” taking place in the present day and wraps itself up in themes of an aging population, outsourcing, a “service” economy with big air-quotes around “service,” and suburban sprawl.

“Orison” takes place in a future a hundred years or so from now, where clones are everywhere and their civil rights are under the boot of a consumer/totalitarian corporocracy. It’s written in a post-modern style, as an interview.

And the central take, “Sloosha’s Crossing,” in a future far beyond that, in a Hawaii where they barely remember the names of places and civilization is hanging on by a thread. It’s written in a pidgin dialect reminiscent of Russel Hoban’s great “Riddley Walker.”

Lana Wachowski, Tom Tykwer, and Andy Wachowski have co-directed a film adaptation that’s coming out this October. You can read about the casting here, which gives you some hints as to how the stories are connected.

Hugo Weaving as genocidal Reverend Horrox / corporate evil made flesh Bill Smoke / Ratchet-like Nurse Noakes / Satanic Old Georgie is particular inspired, to the point where it’s obvious. And using the same actor for Robert Frobisher and the Record Shop Owner is a nice touch. The rest, it will be fun for you to figure out on your own.

Now structurally, obviously like any book you start at the beginning and work towards the back, then you stop and either put it on the shelf, hand it off to a friend, or re-read it.

But here the author is made a kit of it. The first five stories break off suddenly, even mid-sentence, and the next begin. After the larger central story, they conclude one-at-a-time in reverse order.

So it’s shaped like a pyramid, or a musical rondo. In fact, the musical work “Cloud Atlas” is referenced a few times, and is structured the same way.

But each story has foreshadowings and flashbacks of other stories. Which makes it amusing when one character writes, “as an experienced editor I disapprove of flashbacks, foreshadowings, and tricky devices; they belong in the 1980s with M.A.s in postmodernism and chaos theory.” But these devices are the straw that holds together the bricks of the 11 chapters. People, places, artifacts, all connect them. In most cases, the previous chapter turns out to be a fragment of a book, or a movie, or a movie of a book, in the next chapter.

You could, after reading it as the author intended, read the two outside chapters and learn the complete story all at once of Mr. Ewing in the Pacific. Followed by all of Robert Frobisher’s story, Luisa Rey’s story, and so on ending up on a future Big Island of Hawaii. You’d see in each subsequent “book” how it fits into the next chapter’s narrative.

Or, you could start at the middle and read down through the years. Start out with wondering what an “Orison” is and who is this “Sonmi,” then find out.

But like I said, I’m a sucker for puzzles and one things critics agree on is that this is full of them. Now when I see a big structure like this, I begin to think that maybe there’s more to it than just a simple chapter arrangement. Since it’s symmetrical front-to-back, and ends up where it started, I thought I’d find out what was right in the center of the central last story.

By doing a simple page count, cracking open the book to the midpoint and looking, I find that it’s in the middle of a climactic journey to the top of a mountain. If you look at the chapters this way, with the future represented by the x-axis and the path of the book as the y-axis:

That makes perfect sense. But it’s what they find at the top:

Looking at some of the individual chapters the same way, the midpoint of the first half of “Pacific Journal” is this:

The Southern Cross was bright in the sky…

And the midpoint of the second half is about another astronomy-related event, their passage across the equator.

Some of it is very funny, bawdy, corny (there’s a trombone joke!) or a literary in-joke. Timothy Cavendish’s bathroom reading is Gibbons’ “Decline and Fall,” which Sonmi reads in the next chapter also. She also reads Ireneo Fune’s “Remembrances.” In case you haven’t read the Borges short story, that’s a fictitious book. Funes was a young man who, after a riding accident, remembered everything. So it’s not only a fictitious book it’s a very long one. But one of the things Borges mentions as an example is that he “remembers the arrangement of the clouds at every time.”

Themes of recurrence, the number 6, reincarnation, life as literature, astronomy, music are everywhere.