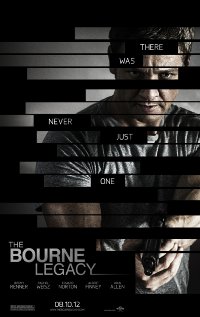 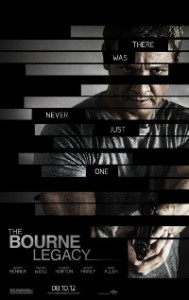 Well we weren’t going to the pool. Clouds and rain all of Sunday and Monday Labor Day weekend. As cabin fever slowly crept over us, we decided to head down to SOPAC and catch a movie.

We’ve been fans of the “Bourne” series since before there was a “we.” I reviewed The Bourne Ultimatum when it came out back in whenever, if you’re interested.

The big question for The Bourne Legacy: How do you make one of these without Matt Damon as Jason Bourne. You don’t, so you have to come up with a clever workaround. The workaround is this (no spoiler here): It’s a parallel story, about another operative in another program. The stories overlap, with characters and footage from “Ultimatum” worked in to give it a sense of its interlocking with the rest of the Bourne “universe.”

Jeremy Renner is of course no Matt Damon, but he doesn’t have to be. By the way, it struck me that he could play Jack Reacher; Tom Cruise just isn’t the right physical type. But I digress. Rachel Weisz is great as the survivor biologist/geneticist who links up with him, and Edward Norton is very very good as the chief operative who brings amorality to a higher plane.

The pacing is good, though not quite up to “Ultimatum.” But what is? The final chase sequence through Manila will still get your adrenaline running.

Later on, we’d DVR’d Mission Impossible III, with the aforementioned Tom Cruise. While it had it’s moments, after a season of Homeland (haven’t seen it? Get with it!) and watching the uber-tight management of resources in the Bourne movie, we were thinking: who are these clowns?

They’re supposed to be the best, but they make stupid mistakes like not using code-names (Renner was simply #5 in “Legacy”), dropping balls all over the place (and the baseball cannon scene is idiotic, sorry), and every step they take is just this close from being a disaster, even getting the truck pulled up.

Philip Seymour Hoffman does evil really nicely here, and while the denouement of the opening teaser is totally predictable, he plays it just right. Vingh Rhames and Michelle Monaghan do nice work as well.

It’s just that the plotting is so, I don’t know…implausible seems like the wrong word to use for a series that offered the trick of flying a helicopter through the Chunnel. Maybe just weak is all.