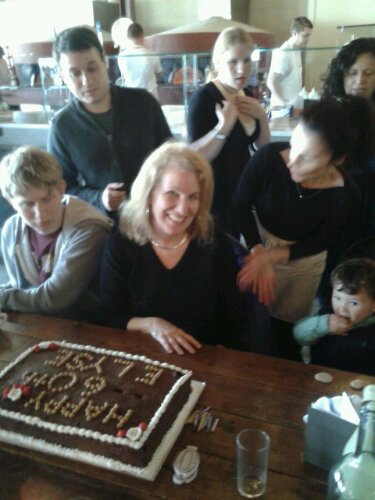 For F’s biiiig birthday we celebrated at Porta in Asbury Park, NJ. 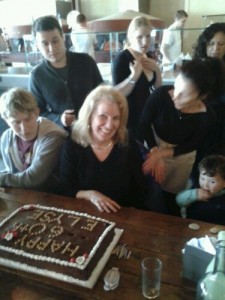 A. will be sending along a bunch of photos later. It was a surprise party and somehow against all the odds we kept it a secret. Not that there weren’t a few scary spots along the way, like some friends who e-mailed questions about car-pooling to a distribution group that included F! We got lucky and cracked her password in time to delete the messages before she read them.

We had family from as far as Baltimore and Syracuse, plus a lot of friends from South Orange and Maplewood. Thanks to L. who recommended Porta — and it was seconded by another Asbury Park local — and A. for doing the legwork.

As for Porta, by the way, We highly recommend it. We had a special brunch menu selection put together so everyone could share. It included plates of olives, Three Trees salad (radicchio, belgian endive and arugula with roasted prosciutto, toasted almonds, pear, rosemary-shallot vinaigrette), salumeria, savory bread pudding (sort of like muffins made from stuffing), almond-crusted french toast, breakfast sandwiches of egg, prosciutto and cheese, pizza margherita, and something called “sweetza” which was their wood-fired pizza dough topped with sweet cheese, whole walnuts, pears and honey. Delicious!