No, not that one. The original. TCM just finished showing this dark political satire, and I have half a mind to watch it again right now. The brilliantly sardonic dialogue of Richard Condon, the smart and creative direction of John Frankenheimer, and the terrific cast all make this one of the great films. 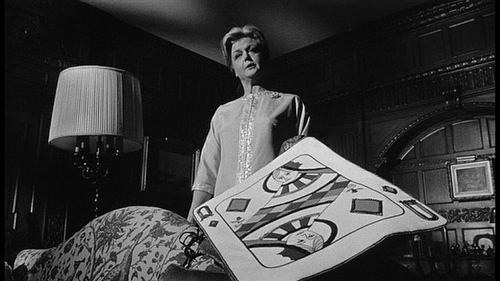 If you saw the just-OK remake of two years ago you know the broad plot outlines; but you’ve missed a lot: there’s plenty more in this one to keep you interested.

Here’s Leigh as Eugenie and Sinatra as Marco meeting on a train traveling from Washington to New York:

Eugenie: Maryland is a beautiful state.
Marco: This is Delaware.
Eugenie: I know, I was one of the original Chinese workmen who laid the track on this straight.
Eugenia: But, em... nonetheless, Maryland is a beautiful state.
Eugenia: So is Ohio for that matter.
Marco: I guess so, Columbus is a tremendous football town.
Marco: You in the railroad business?
Eugenia: Not anymore. However if you will permit me to point out, when you ask that question, you really should say: Are you in the railroad line?
Marco: What's your name?
Eugenia: Eugenie.
Marco: Pardon?
Eugenia: No kidding, I really meant it. Crazy French pronounciation and all.
Marco: It's pretty.
Eugenia: Thank you.
Marco: I guess your friends call you Ginny.
Eugenia: Not yet they haven't, for which I am deeply grateful... but you may call me Ginny
Marco: What do your friends call you?
Eugenia Rosie.
Marco: Why?
Eugenia: My full name is Eugenie Rose. Of the two names I've always favored Rose, because it smells of brown soap and beer. Eugenie is somehow more fragile.
Marco: Still, when I asked you what your name was, you said it was Eugenie.
Eugenia: Quite possible I was feeling more or less fragile at that instant.
Marco: I could never figure out what that phrase meant, 'more or less'.
Eugenia: Are you arabic?
Marco: No.
Eugenia: Let me put it another way: are you married?

Don’t believe me? How about instead you pass the time with a game of solitaire? Come see me again when the queen of diamonds comes up.